Have Outlook store mail data in a drive other than C:

As with many things Microsoft things that you would think are simple to do can turn out to be, perhaps unnecessarily, hard.

All I wanted was for Outlook to store its mail data (stored in .pst and .ost file) in E: drive instead of the default C: drive but for that, at least with the latest version of Outlook (2019) you actually need to edit the Registry. 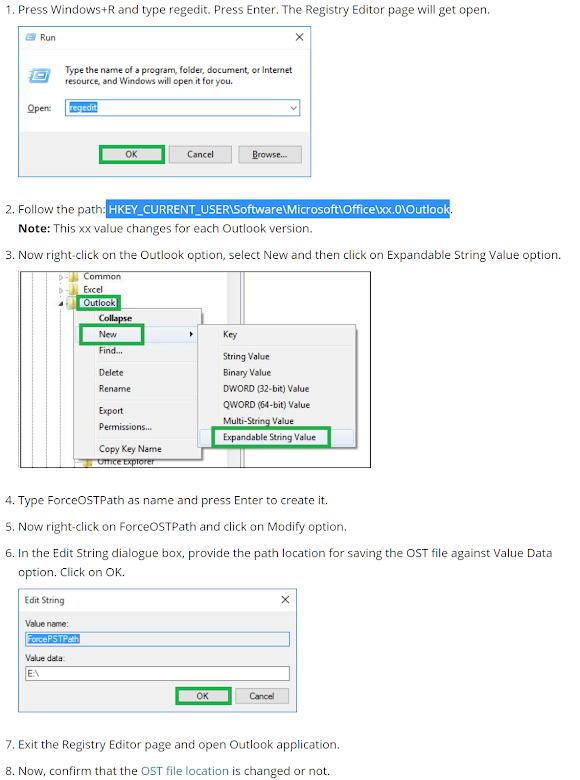 Obviously, you can have it point to a full path and not just the root directory of a drive.

Posted by Fotios at 4:56 PM No comments:

It is not mentioned anywhere but this particular model does not support the IEEE 802.11n protocol even with its firmware flashed to the latest version published by the manufacturer. You will need to force your router to 802.11g mode for it to be able to connect successfully and be accessible. 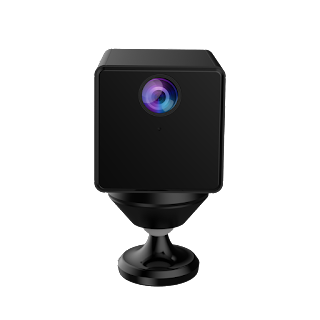 Posted by Fotios at 7:34 PM No comments:

Charge your motorized toothbrush with a wireless phone charger

In case you forgot to pack your motorized toothbrush charger, basically place your toothbrush, standing up, on a wireless phone charging pad or on your phone, if it supports reverse charging.

NOTE: after testing this I can confirm that the wireless charger does charge the toothbrush but ONLY A LITTLE BIT regardless of the time you let it charge. I suppose the there are significant differences in the specification of the wireless charging interfaces of the two. Charge is barely enough for a single short brushing session.

Getting the right International travel COVID-19 certificate in Greece

There is a large number of private laboratories/clinics in Greece that do COVID-19 diagnostic testing on short notice and can provide a certificate with your results in English.

Regardless of the which country you are heading to the most important thing to remember is that the type of COVID-19 diagnostic test required in all cases is the PCR (Polymerase Chain Reaction) type of test, also known as, molecular test, nucleic acid amplification test (NAAT), RT-PCR test, or LAMP test. To be on the safe side though, make sure the certificate you receive refers to it as "PCR" or "RT-PCR" which is the name everyone will recognise and accept as valid.

Then, depending on which country you heading to, things can become more demanding. For instance, the airline employee at check-in or the immigration officials at the port of entry may require that you produce documentation or online evidence that the laboratory you did the testing at is officially certified/recognised for this type of testing by the Greek government. Given that the Greek government's sites are usually in Greek and pretty terse in quantity and quality of easily accessible information this could prove hard to do. I did do some research and thankfully there is official info online, in English, that can be used for that purpose.

The official Greek certification body for laboratories (including medical) has a minimal English version of its site here: esyd.gr

The site is the typical buggy, incomplete, non user friendly Greek public sector mess. It may take some time but eventually you will hit this page here (screenshot below) which allows you to get a listing of all medical labs certified to ISO 15189 standard. 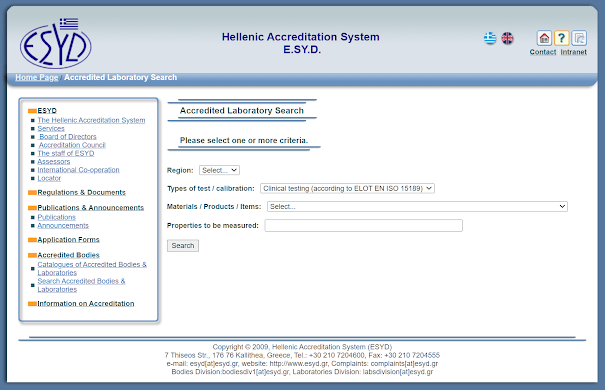 The results are not necessarily labs that do COVID-19 PCR diagnostic testing and they are a mix of public and private entities. Using this listing you can find those labs that are listed under ISO 15189 certification for "human samples", like the one below, and which, in their "Scope of Accreditation" document, linked into their "Accreditation Details" page, list COVID-19 PCR testing as well. 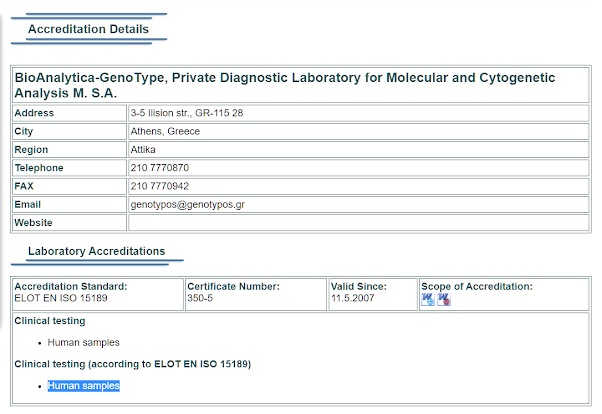 If you already know of a lab that does COVID-19 PCR testing and want to check if it is officially certified then you can use this search form here.

Finally, for those able to read Greek there is a precompiled list of certified COVID-19 PCR diagnostic testing labs here.

Posted by Fotios at 1:19 PM No comments: 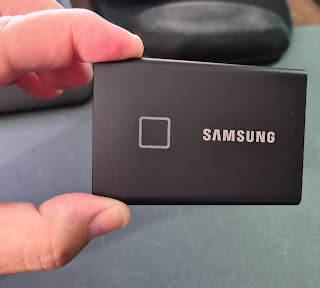 Posted by Fotios at 3:15 AM No comments:

Caching for Javascript based web add-ins for Microsoft Office is super problematic. Hard to make it let go of certain files and use new versions of them. Microsoft gives some instructions on how to clear the add-in cache here but it still won't work sometimes.

Especially problematic files are "FunctionFile.html" and "FunctionFile.js" if the Visual Studio naming convention is to be followed (i.e. how Visual Studio names these files in an auto-generated web add-in project). These files are not downloaded in the task pane's browser instance and therefore caching of them does not follow the same rules; they are extremely sticky and development can get pretty frustrating.

Only way I have found to deal with the problem is rename them in a versioning way whenever I effect changes on the files and want to see the results immediately. Specifically, assuming that the "Home.html" and "FunctionFile.html" naming convention is being used:

Microsoft has produced irritatingly problematic technologies before but I'm having difficulty remembering something as persistently problematic and as irritating as this. They keep throwing their dirty laundry at the developer.
Posted by Fotios at 10:25 AM No comments:

Case 1: You are being asked to enter an OTP sent to your phone, although you don't have two step/factor authentication/verification, and you have lost access to your phone number or can't receive messages or voice calls where you are, e.g. extraordinary authentication that may occur when you are travelling to other countries where your phone is not working.
Solution: Solution assumes you still have access to the email address associated with your Amazon account. Go here and enter your email address. It will ask you to enter an OTP code that will be sent to your email. Check your email, get the code and enter it; you will then be given the opportunity to change your password AND if needed also the phone number (e.g. new local SIM card or other phone number that does work) associated with your Amazon account.
Case 2: You can still log in to your account but your account has been locked because Amazon thinks you may not be the actual owner of the account.
Solution: Go here and follow the instructions.
Posted by Fotios at 3:12 PM No comments: